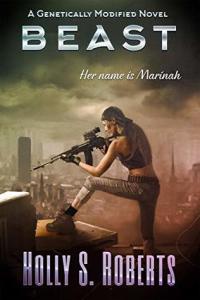 Electromagnetic pulses began a catastrophe that changed the world as we know it.

The next round of destruction brought monsters from hell that almost wiped out civilization.

The third wave sent a new breed of monster into the mix called Shadow Warriors capable of killing hellhounds.

Two years after the end of the devastating war, electromagnetic pulses start again, and this time humanity may not win.

King: Half man, half beast. Leader of the Shadow Warriors.

Marinah: Her job for the Federation is to bring King back into the fold to save humanity, again.

Problem: King and his men were betrayed by the new government and their memories are long and deadly.

Solution: Marinah must risk everything to prove she’s someone they can trust.

These were the first books I’ve read from Holly S. Roberts. However, after doing some research it seems like she uses several aliases so it’s possible I actually have read something from her before (hmm… maybe something to look into eventually). Let’s just assume these were the first and I was definitely pleasantly surprised. Roberts was able to pull the reader into the story without being over the top. We’ve all been there, some authors will take 3 pages to describe a green car, we get it, move on already! Not Roberts. I never felt like the story wasn’t moving along. I also loved how Roberts was able to describe something just enough to leave bits and pieces to the imagination. Something else I want to mention is there were very few editing errors. Recently, I’ve noticed some books on Kindle Unlimited really need to be sent to an editor.

I absolutely loved! how these books were dystopian AND paranormal. The “other world” characters are part alien, part human, part werewolves, part monster… You get the picture. They are totally WEIRD! And I thought that was so great! I’ve read books about aliens. I’ve read dystopian. I’ve read paranormal. This book combines them very well and puts them into something that’s completely new. I really enjoyed the development from book one to book three and how each character’s story evolved. Marinah starts out as the scared/sheltered girl who is very awkward and frankly ready to die. She becomes this confident/bada$$ chick who doesn’t need any man (or woman)’s help to get stuff done. One negative I had was how the stories string together. It felt like Roberts wanted to make sure each book ended without a cliffhanger and in order to do that each book started on an island and then ended there after the characters travel to the US. I think the stories could have ended without having to travel back and forth multiple times. Seemed like a way to get more words in without any real plot.

Marinah and King are the main couple the books revolve around. I was a little worried about how fast they fell “in love”. It seemed closer to “insta-lust” and I’ve never been a fan of that plot line. However, the reader later learns why they grow close so quickly. I don’t want to spoil anything but I will say their relationship makes sense and is a great base to the plot line. While the two of them are really the “main” couple, I liked how the books had other couples in the background evolving on their own. I thought that was very clever of Roberts. It would be very easy for her to have many spin off novels that revolve around the other couples.

I was very disappointed when I got to the end of Beast. Not because I wanted it to end. Not because it ended in a cliffhanger. It’s because I don’t have Queen, the next book. I want to keep reading! I want more Marinah, King, Che, Ruth… I want more and I’m wondering when that will happen. Roberts has not announced a release date but she has mentioned Queen will not be the end. I can’t wait to read what happens next. I can’t wait to get more. PS Roberts, if you need an Advanced Reader let me know!

Something I want to note about these books, is the main character is actually based on a real person. Marinah was the daughter of one of Roberts’ readers. Roberts followed Marinah’s life and grew connected with her when she was taken much too early. She passed at the age of 19 and Roberts connected with her mother and asked if she could use Marinah’s “likeness” and make her the main character of this series. I didn’t realize this until after the first book. Once I read the note from Dinah (Marinah’s mother) I actually felt more connected to the main character. She became real in the second book and I could actually envision her doing everything in the book.